The Phase I overview highlighted the severity of the affects that the pine beetle is having on First Nations communities. As a part of the assessment, First Nations estimated the percentage of reserve and traditional land affected by the Mountain Pine Beetle Epidemic. 33% of respondents estimate that 50% or more of their land base was impacted by 2006. 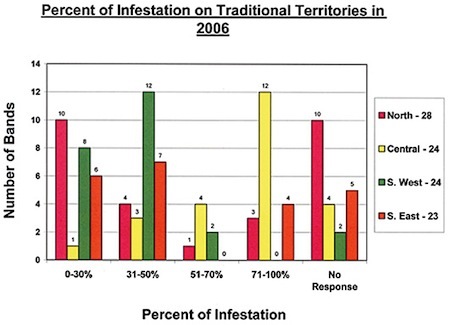 77% of those same respondents estimate that 50% or more of their land base will be impacted by 2011. 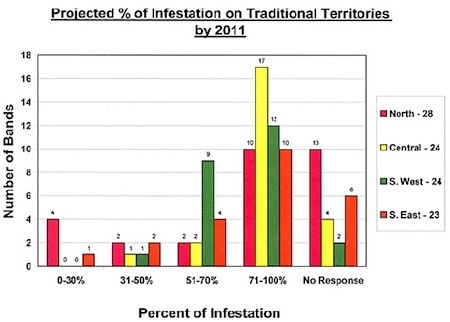 19% of respondents stated that 100% of their lands will be impacted by MPB by 2011. The study also identified impacts on traditional economies and cultural disruptions being experienced by most of the MPB impacted First Nations.

During Phase II – Response to FN MPB Impact Assessments, FNFC contracted the CFDC of CIFN to implement the following objectives:

In responding to the Pine Beetle epidemic, many First Nations employed creative solutions tailored to meet their particular community needs. In Phase II of the impact assessment, these creative approaches were shared and an inventory of best practices was created as a resource for other First Nations. Those First Nations providing a Best Practice or an Issues Paper received a $2,500 payment for the use of their submission.

Phase II – Response to FN MPB Impact Assessments: Each of 103 First Nations have been offered $30,000 to implement their response to priority impacts. These First Nations were invited to draft their own deliverables and include them in a signed contribution agreement that requires a report on deliverables by November 30, 2007. A final report on Phase II activities will be compiled for the FNFC by late February 2008.

Partnership Incentives of $10,000 for each First Nation: Recognizing the economies of scale and the fact that many First Nations have similar priorities the FNFC Board of Directors supported this unique program to encourage the development of partnerships among First Nations and between First Nations and local industry or off reserve communities.