Our goal is to advocate for policy development reform to increase the role BC First Nations play in the governance and stewardship of forest lands and resources.

The work ensures that First Nations interests and priorities are addressed in provincial forest programs, policies, and practices. Some of the current and past policy issues that the FNFC has reviewed are described below:

The FNFC has worked to understand the level of participation in the forest sector that FN hold and have continued to advocate for improvements in provincial tenure policy that would make First Nations held tenure more viable.

In  December 2007 we submitted the Tenure Viabilities Paper to the Minister after a year of Working Group discussions with the province.  Tenure Viability Report (Dec 2007) 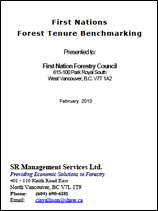 In order to generate objective information to assess the impact of future policy changes, the First Nation’s Forestry Council (FNFC) asked SR Management Services Ltd. (SRM) to benchmark tenure awarded to First Nations. The volume and the number of tenures awarded to First Nations as of November 2008 and the subject of the survey results reported here was 8.642 million m3/yr1 and 262 tenures (Appendix 3 Chart A1 and Table A1). The volume awarded was approximately 10% of the provincial annual allowable cut (AAC) of approximately 86 million m3/yr with 57 million m3 harvested (e.g. 66% of AAC). Of the 8.642 million m3/yr awarded volume to First Nations, 74% was held by survey respondents. 100% of First Nation tenure holders were contacted while conducting this survey. 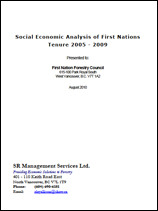 This report provides an evaluation of the economic implications of the tenure awarded to First Nations for the years 2005 through 2009 inclusive. The timber harvest data was provided by the MoFR (Ministry of Forests and Range). The First Nation employment associated with the harvest was collected via survey during the course of this project. The survey was conducted during 2010 and the survey response rate was approximately 55%.

Aborignal Title and the legal relationship with forests

The First Nations Forestry Council in partnership with Vancouver Island University, Centre for Pre-confederation Treaties and Reconciliation has produced a report that reviews the legal relationship with forests from a Crown perspective and from an Aboriginal perspective. The report discusses Aborignal Title and the legal relationship with forests, how it amounts to full beneficial ownership and the concepts of consent, consultation and accommodation. Finally, implications for decision-making and forest management are considered.